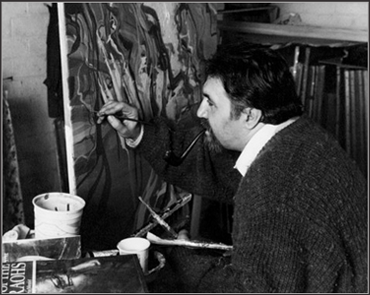 Arto started painting in 1963 after being goaded into it by an artist friend. He converted the coal cellars of the rectory into a studio and within six months had produced seventy paintings. The first article about his art appeared in 1965 in ” The Idiom” an arts magazine produced at the University. At the time he was having his first one man exhibition at the Manchester Central Library and it was transferred to the Student’s Union afterwards.

Without the “benefits” of a formal art school training his paintings possess an individuality which is entirely his own. Over the years Arto succeeded in fusing his two backgrounds of East and West into a new and personal style. He was a master of line and colour. His architectural training is evident in the linear aspect of his works. His pictures are full of sinuous lines which flow across the canvasses creating shapes, spaces and depths without much recourse to perspective so showing the influence of ancient Armenian manuscripts. Primarily though he was a colourist and he has said “I am from a warm country. Colours are brighter in the Middle East because of the sun. I don’t have theories about colour, I follow instinct. My colour has modified though – it has been toned down by the British weather!”

Arto exhibited both in the north and south of England as well as abroad. Along the way he struck up friendships with fellow northern artists Colin Jelicoe, Geoffrey Key, John Picking and Emanuel Levy. His works are in several private collections in Britain and abroad as well as in galleries in Armenia, Syria, Lebanon and Nigeria.

Each painting can be distinguished by his distinctive signature which combines his first name in English and Armenian.